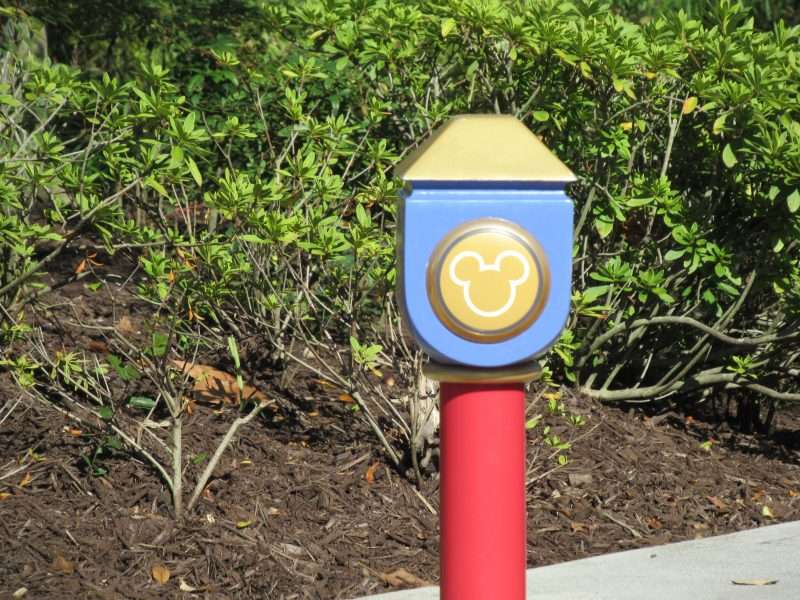 A Complete Guide To The Disney World Fast Pass System

Welcome back! If you enjoy this post, please consider giving it a share and letting me know in the comments! Also...in case we are not already virtual buddies, I would LOVE for you to follow me on Pinterest, Twitter, Insta or Facebook!P.S. This post may contain affiliate links, which helps me run FlipFlopWeekend. I appreciate all of your support! 10% of all affiliate income is donated to charity. Check out my full disclosure here.

Imagine you are standing in sweltering heat under the hot, Florida sun. You have traversed many miles to make your way to Walt Disney World and you know you can’t leave without riding the beloved Big Thunder Mountain, Haunted Mansion … or whatever attraction will fill your heart with magic. But, you couldn’t figure out the Disney World FastPass system.

So, alas, you stand while others ‘in the know’ whiz by you with their head held high and you swear they are silently judging you as they take their magical VIP walk aka the FastPass line. 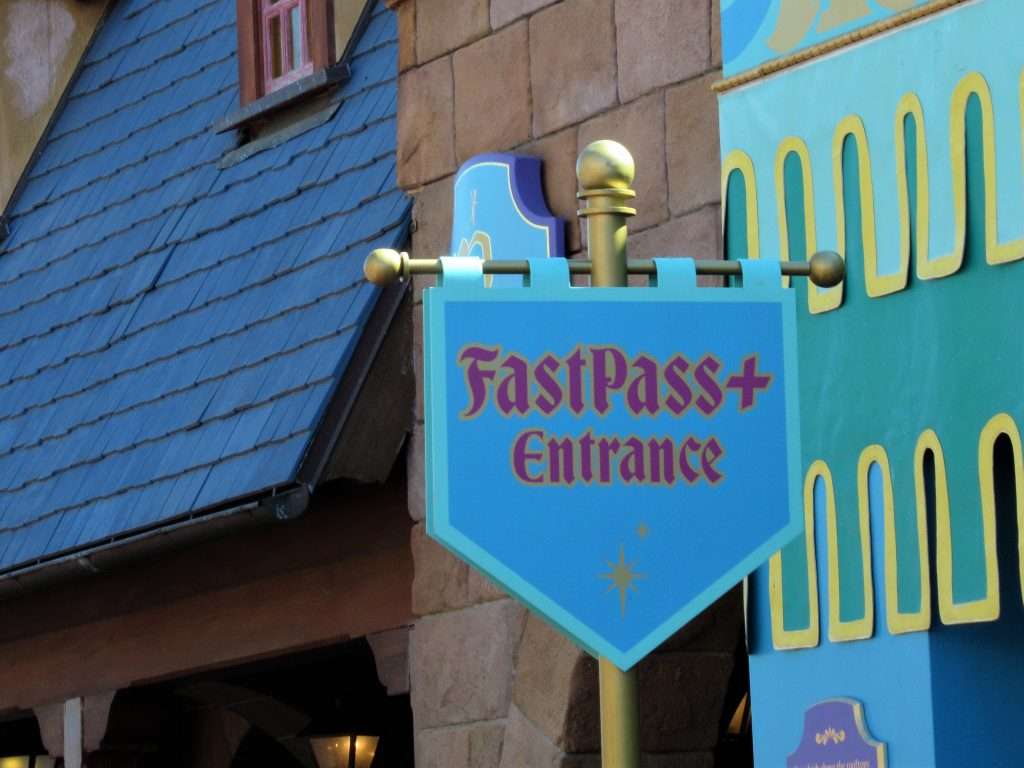 I know the feeling. When Nathan and I first came to Walt Disney World in 2009, I had no idea that FastPass was a thing.

We were such rookies.

I simply bought our tickets ( From UnderCoverTourist actually… I still recommend them) and showed up at the parks with very little planned.

Fortunately, we have learned a lot since moving to Florida almost five years ago and being Walt Disney World annual passholders.

Now, we seamlessly navigate the Disney World Fast Pass system and I am so Fast Pass spoiled that I generally don’t wait longer than 15 minutes for anything.

So, to prevent you from making the same mistakes we did… here is my quick guide to the Walt Disney World Fast Pass+ system.

Note: FastPass, FastPass+ or MaxPass? What is the difference? 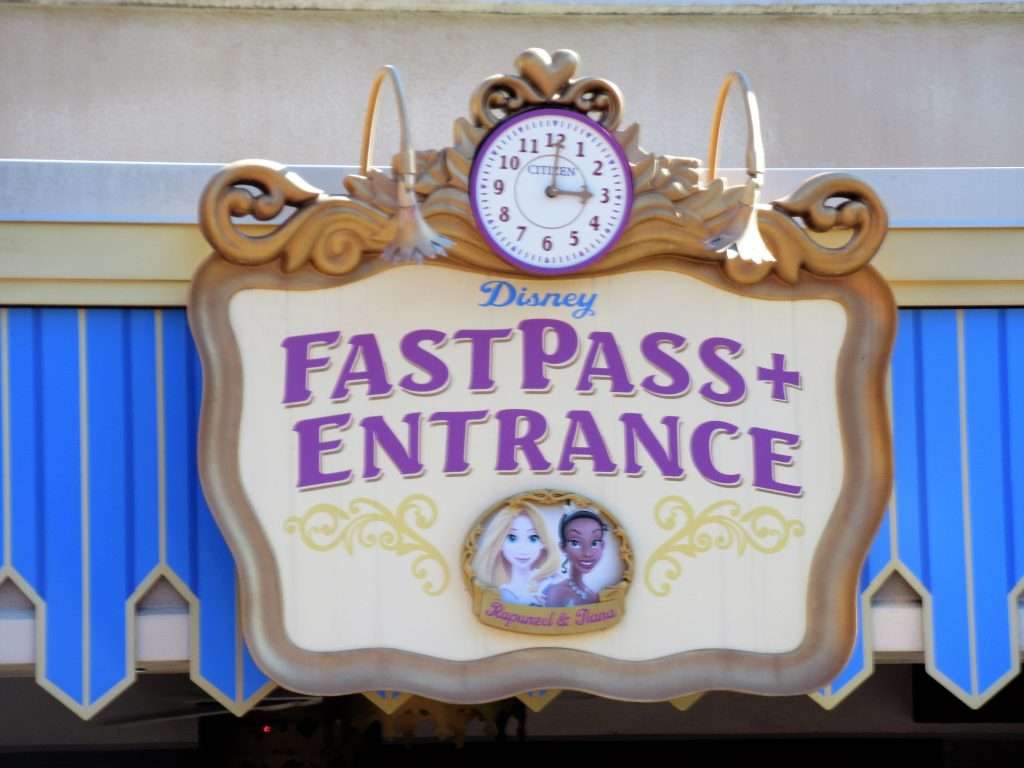 In this post, you may see me refer to the system as FastPass+, FastPass or FP+.

FastPass is the original term coined to the system in 1999 when it was first introduced at Walt Disney World. At the time, it was basically a paper ticket ride reservation you were able to obtain on the day of your park visit.

In 2014, Walt Disney World revised the system to the current FastPass+.

Disneyland California still utilizes the original FastPass system. However, they have introduced a paid MaxPass system, which I will not be delving too deeply into on this post.

Just as a point of clarification, in this post, I may accidentally leave off the “+”, and just reference ‘FastPass’, but this guide is geared toward Walt Disney World’s current FastPass+ system.

What is The Disney World FastPass+ and How Does It Work?

In simplest terms, a FastPass is a reservation you make digitally to your Walt Disney World MagicBand or park ticket through My Disney Experience for a specific time-frame at a particular attraction.

When you snag a Disney FastPass for a particular attraction (this could be a ride, show or special character meeting), you are basically given an express pass to the front of the line.

Imagine yourself sitting in the driver’s seat of a Ferrari racing up the coast… against a Ford Pinto. It’s like that.

FastPasses are distributed in a limited amount of 1-hour increments of time for any given day.

For example, if you score a coveted FastPass time for Slinky Dog Dash from 1:00-2:00 p.m. in the afternoon, you can arrive at any time within that hour, enter the FastPass+ line and significantly shorten your wait time.

Make your FastPass+ reservation, show up at your allotted time, scan your Disney park ticket or MagicBand at the RFID reader located at the designated FastPass+ queue and enjoy the ride. 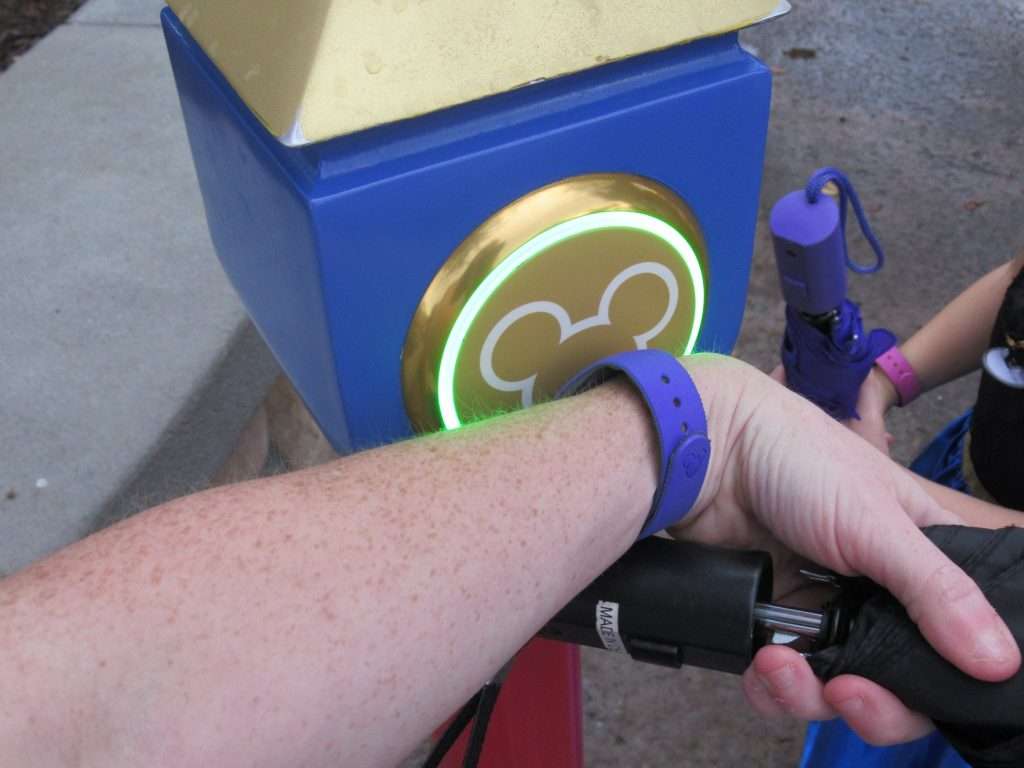 Here’s the deal,  you are only able to reserve three attractions in advance at a time, and those three must be at the same park.

Guests staying at a Walt Disney World resort hotel can make their FastPass+ reservations through My Disney Experience ( either online or through the app) up to 60 days in advance of their check-in date.

Ticket holders who are not staying on property (this includes annual passholders) can make their FastPass+ selections up to 30 days in advance of the day they are making their visit to the theme park.

Make sure that your ticket is linked to your My Disney Experience accounts, as that will be the only way to book your FastPasses in advance.

It’s important to know that there are a limited number of FastPasses distributed for each ride daily.

So, if you want a FastPass to a particular attraction, make sure you get on as close to 7:00 a.m. at that 30-60 day mark to better your odds of getting the FP. How To Select a FastPass Through My Disney Experience

Once you open the My Disney Experience App, select the Get FastPass+ option under My Plans. 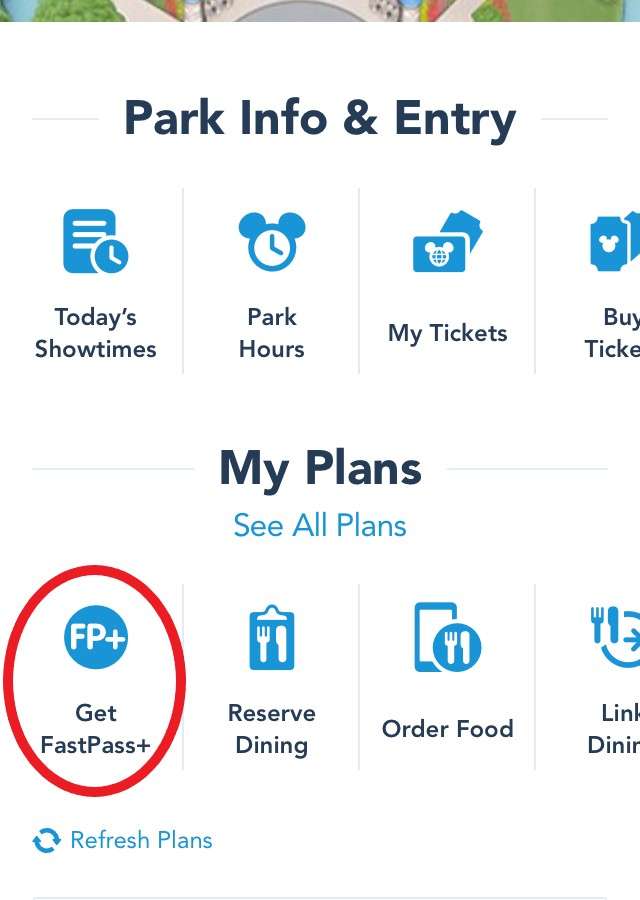 Select the guests you are reserving FastPasses for through your Friends and Family List. 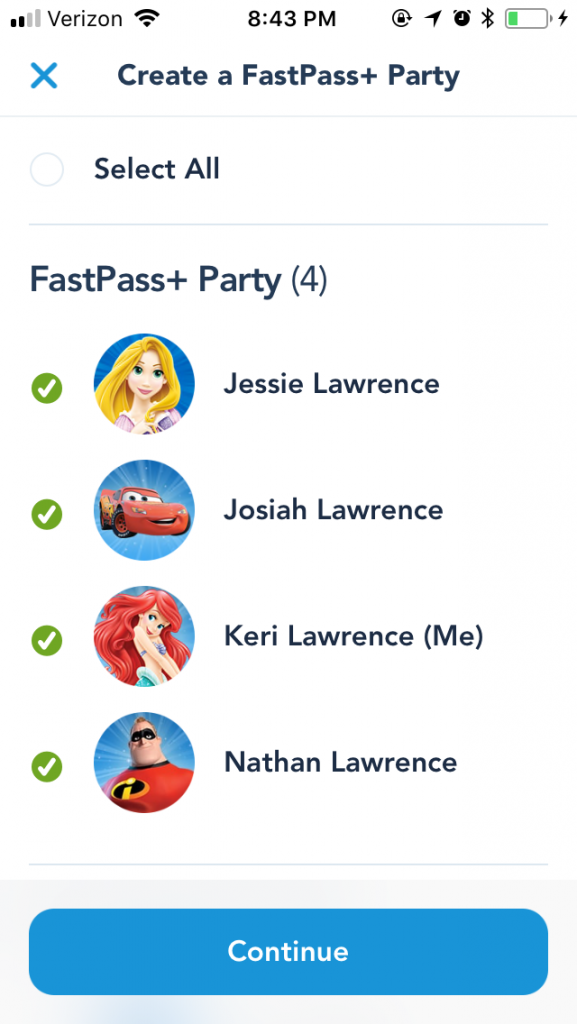 Select the date you are seeking a FastPass for… 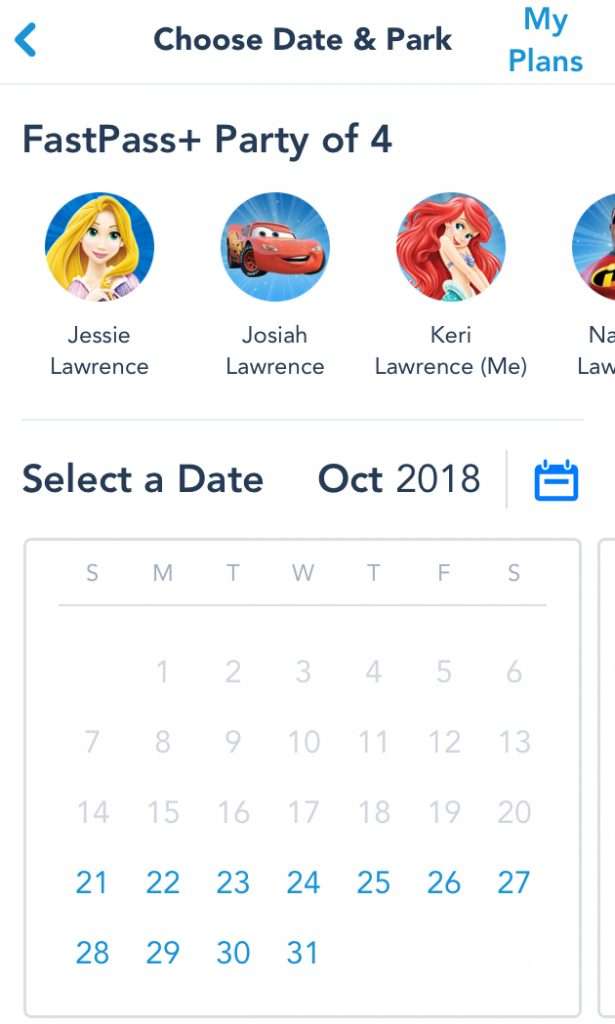 And the Disney Park you plan on attending…. 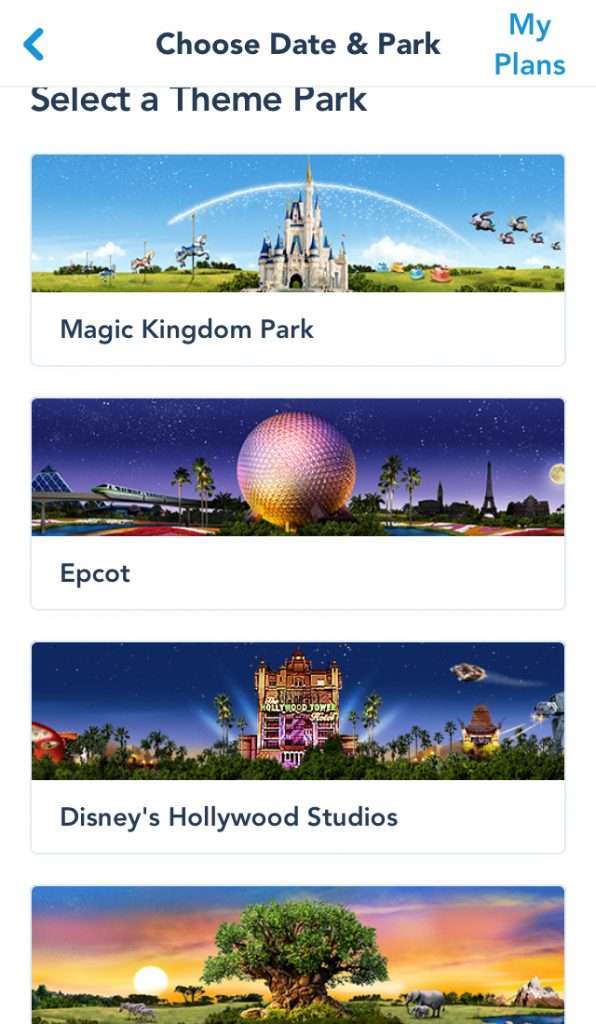 You then will see available attractions and time selections. You do have the option to filter times to search for morning, afternoon or evening time slots. 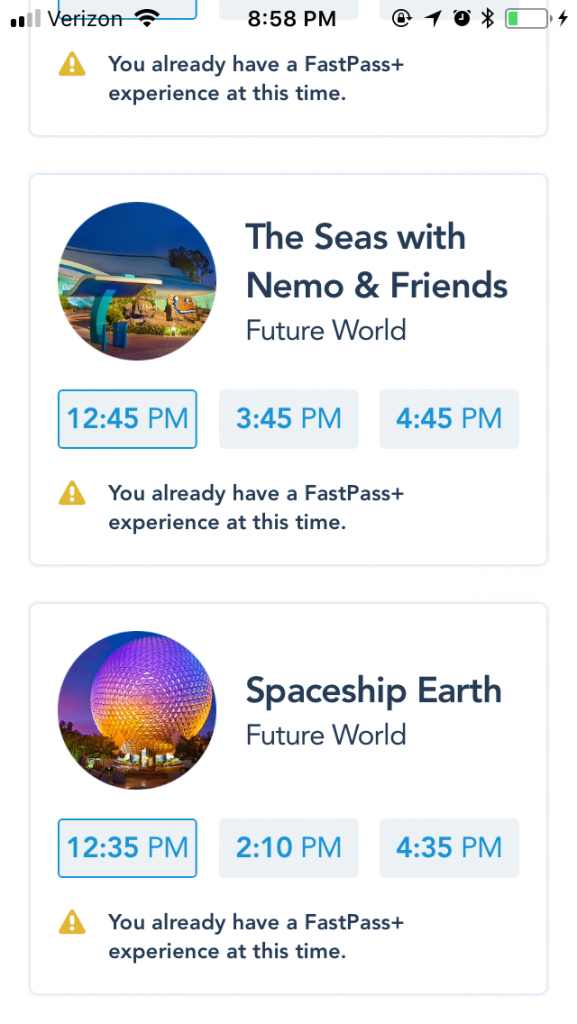 Make your selection and confirm 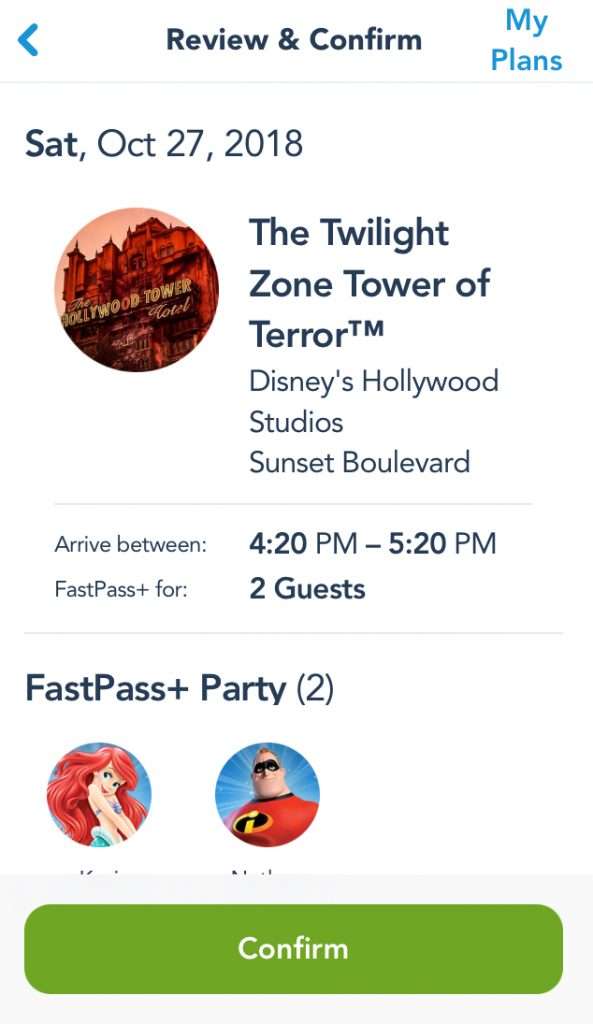 After confirming, you will head to a final page to confirm your FastPass selection. At this point, you will have the option of being done or selecting additional FastPasses for another day or the same day ( so long as you have not maxed out your 3). 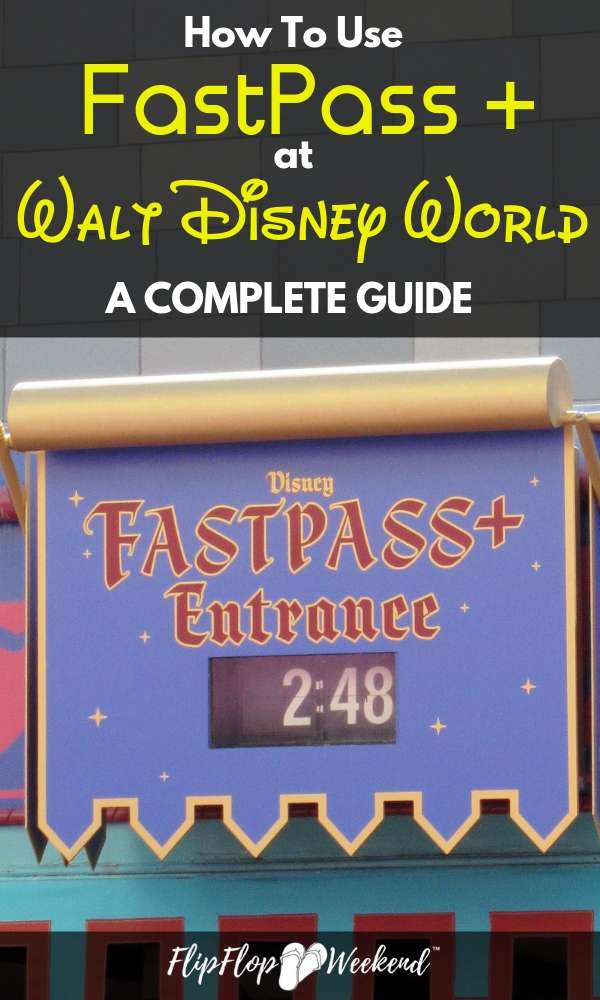 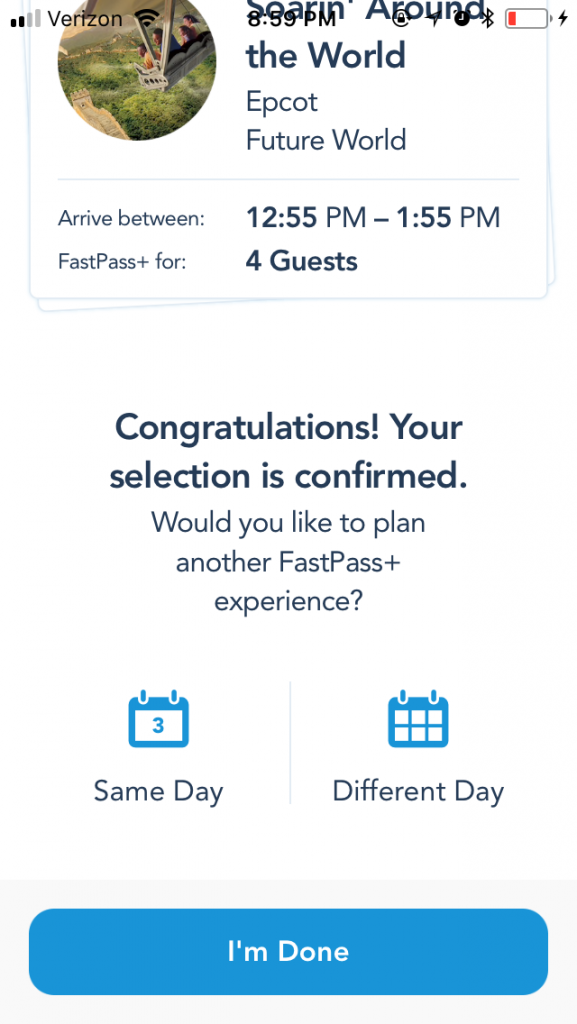 I walk you through the steps online in this short video below:

We all know there are some attractions that are more popular than others. When new attractions and rides open, it can be a challenge getting FastPasses, because they are so popular and you know the lines will be hours long.

(This is especially tough on those of us who can only book 30 days out, but I digress.)

At Epcot, Hollywood Studios and the Animal Kingdom, Walt Disney World has placed rides and attractions on either Tier 1 or Tier 2 categories. If an attraction is categorized as Tier 1, you will only be able to select one attraction in that category. This does prevent some FastPass combinations of the most attractive rides.

This often means that you will have to make a choice.

For example, at Epcot, you can book an advanced FastPass for either Soarin’ or Test Track, but not both.

However, Magic Kingdom is on a tierless system, making it still possible to get both Peter Pan’s Flight and Seven Dwarves Mine Train. Yay! What does the Disney World FastPass Cost?

Though Walt Disney World is not known for being cheap…you can rest assured knowing that making a FastPass+ reservation will cost you absolutely nothing.

Are there penalties if I miss my FastPass+ time?

If you miss your one-hour time-slot, there is no penalty and you will not be charged.

Typically, Walt Disney World affords guests some grace period where they will allow you entry around 5 minutes before and up to 15 minutes after your scheduled slot. However, don’t count on this grace period and try to make your reserved time. 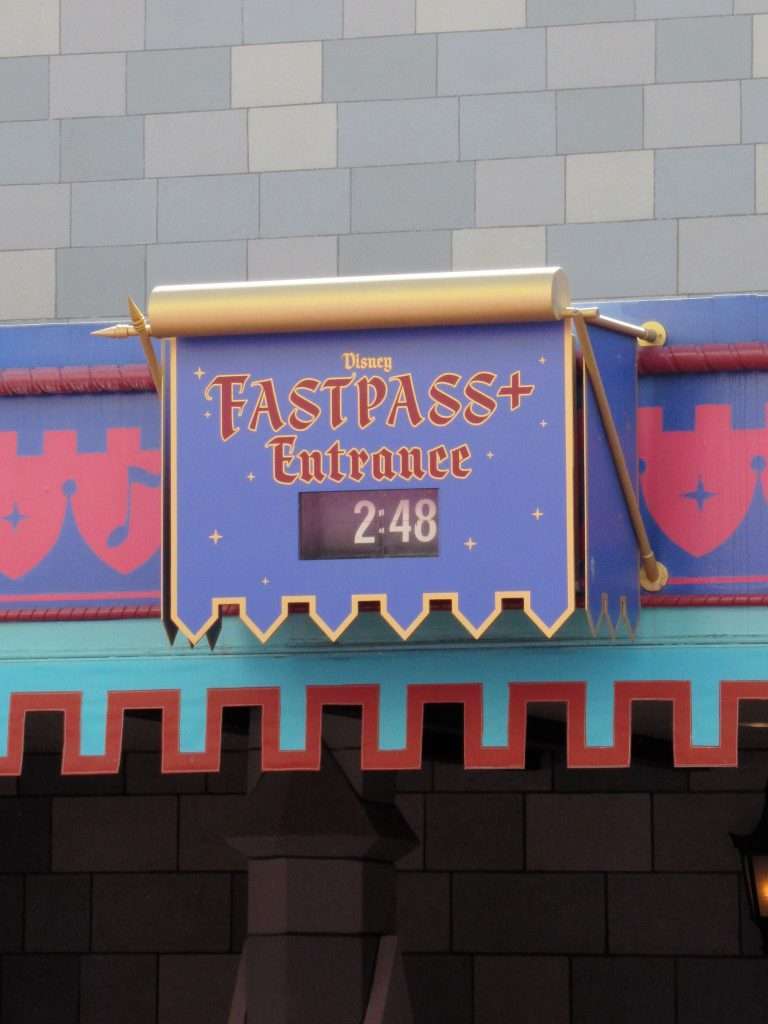 However, it may be impossible to get a new FastPass+ reservation that day for many rides that may be more popular.

If you don’t think you can make your FastPass time, try to see if you can modify it in advance. Can I get Additional FastPass+?

After you utilize your three pre-reserved FastPasses in the park, you can add additional FastPasses one at a time through the My Disney Experience app or at a Disney Kiosk around the various Disney Parks.

However, you will only be able to select from any available FastPasses that Walt Disney World has left for distribution that day. So, don’t be too disappointed if you can’t get Peter Pan’s Flight at the last minute.

Where Are The FastPass+ Kiosks At Each Disney Park?

I typically suggest using the app to make additional FastPasses, simply out of convenience. For example, once you have entered the queue of your third FastPass+ selected ride, simply hop on the app to determine what is available for the remainder of the day while you wait to board your ride.

However, if the app is down or your phone has died, you can still check out the FastPass+ kiosks around each Disney Park. Here are their locations:

What is a good FastPass+ Strategy and additional tips? 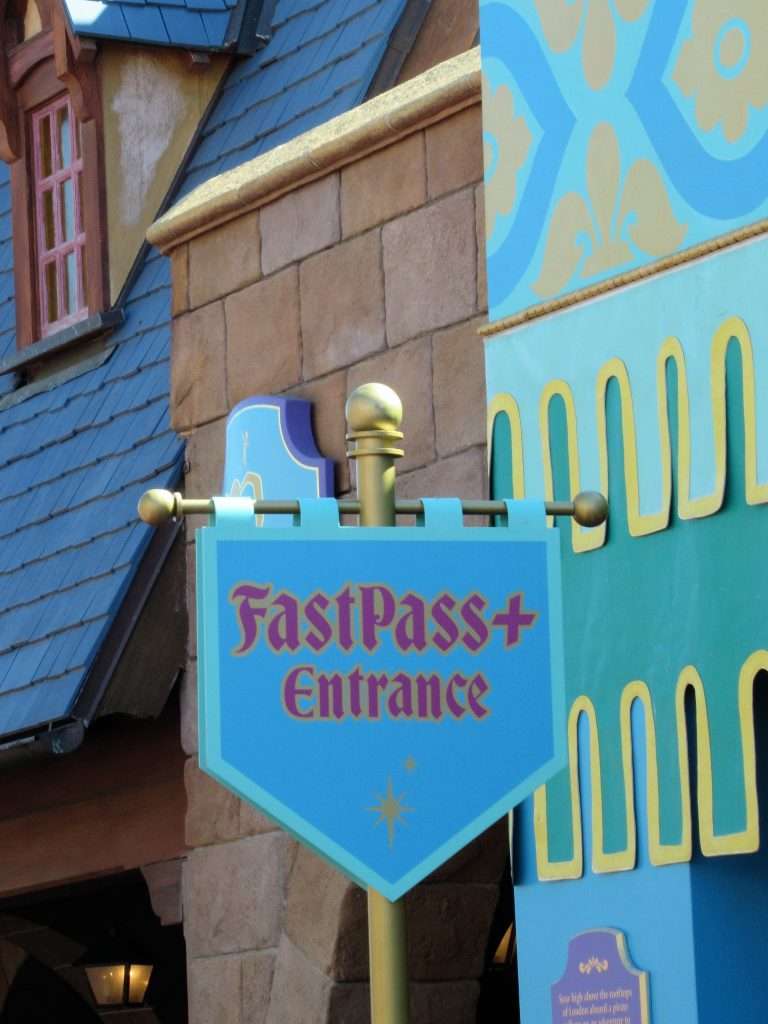 If you get to the park early, you can usually hit up some of the more popular rides as soon as the park opens without much of a wait.

So, generally, try to book your FastPasses beginning around mid-morning ( 10:00 a.m. or so) and then as close together as possible, obviously adjusting around dining reservations and lunchtime.

This strategy will free you up to then have the rest of the day available to snag additional fastpasses one-by-one as they are available.

This will preclude you from getting any additional passes during the day. You may need to wait a few extra minutes to get seated at showtime, but you won’t get a bad seat and you will get into the night show. So, there are better uses of the FastPass+.

Also, keep in mind that there are single rider lines at some more popular attractions like Expedition Everest, Rock’N Roller Coaster and Test Track.

So, if you are comfortable riding next to a stranger, you and your party can split up through the single rider line and typically get through much much faster and save a FastPass+. I mention this tactic in my post 10 Quick Tips For Your First Walt Disney World Vacation.

If you are having a hard time snagging a FastPass, try adjusting the number in your party to try to get one or two. Sometimes it is easier to modify the FastPass and add members to the group instead of trying to get multiple at once. Additionally, if you split you your group of four into pairs, you may still be able to snag a FastPass together by getting overlapping times.

For example, many times if I put all four of us into the system, I won’t be able to get a desired attraction. But if I snag a FastPass for Nathan and Josiah at 10:45, I can go in and try to get a FastPass for Jessie and I at the same attraction for 11. With the hour window-time frame, if the boys wait until 11, we can all ride together.

Additionally, after you USE a FastPass, while you are in the queue, log into My Disney Experience and see if you can adjust your next FastPass for an earlier time.

This is sometimes feasible since the Disney system won’t permit overlapping FastPass times. However, once a FastPass is used, a later FastPass may not be able to move up earlier into the day since the ride you are waiting in line for no longer takes up ‘time.’ in the Disney system.

What Attractions Should You FastPass+ 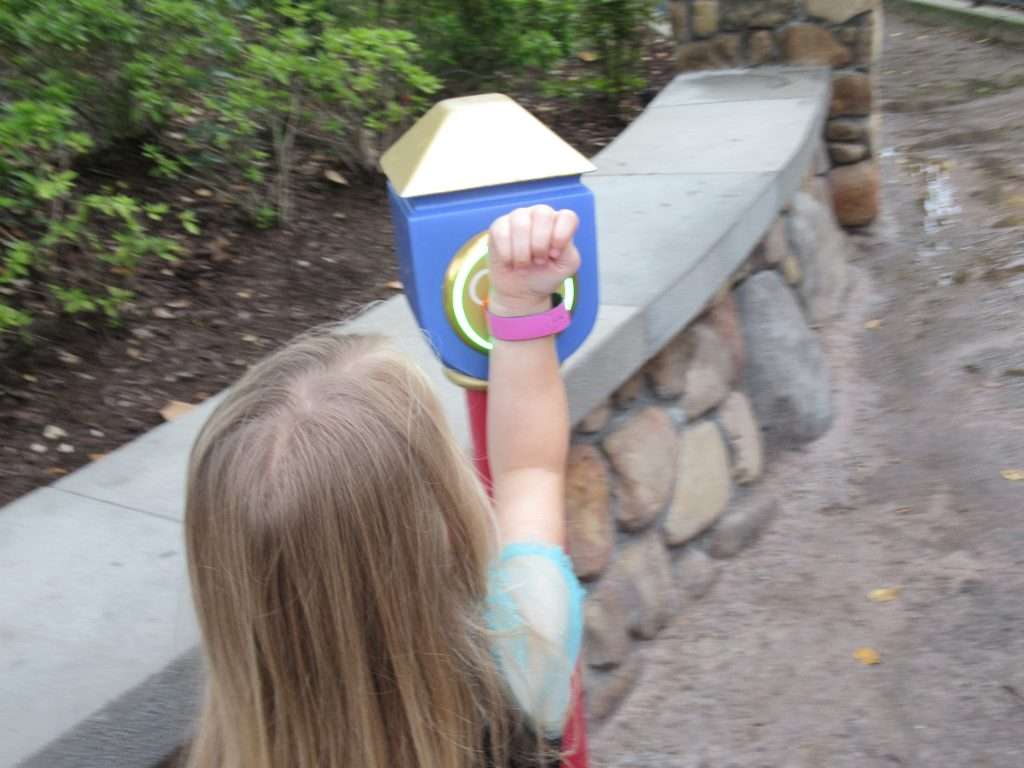 Many people just want to know what their top three FastPasses should be. However, not everyone has the same preferences and goals.

So, I am just going to share rides that you should absolutely get a FastPass+ if you can… bearing in mind what I said earlier in this post about single rider lines and the possibility of hitting a popular ride first thing in the morning.

That being said…here are the rides that are worth the FastPass+ at each Walt Disney World park. 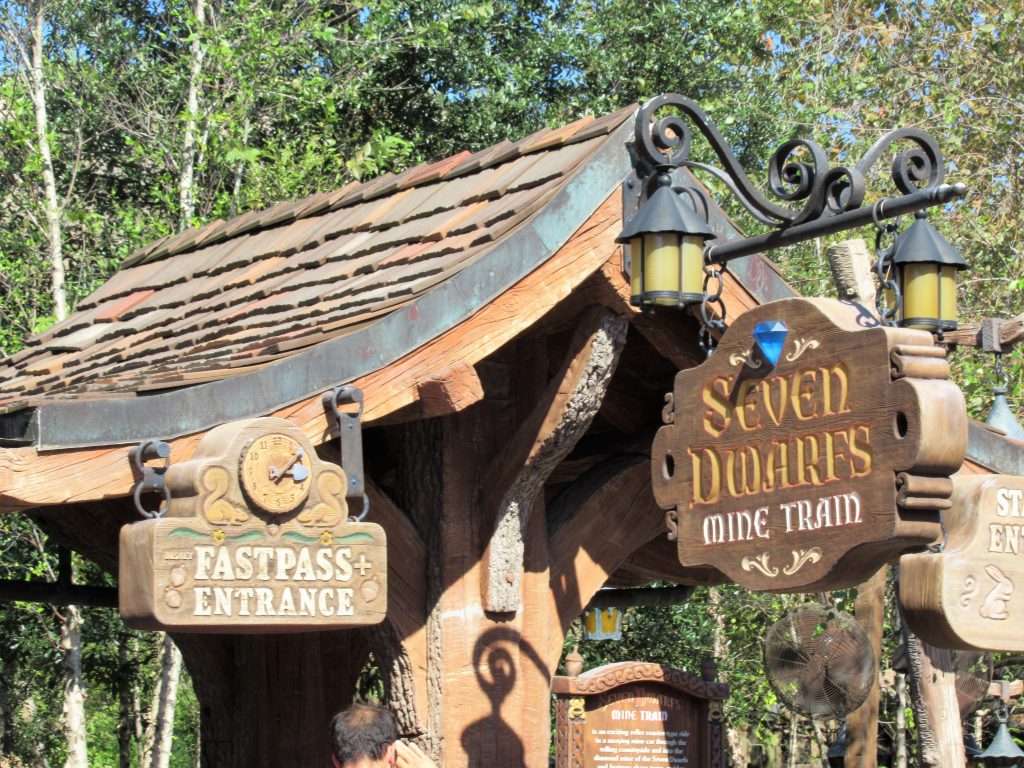